“The Attorney General’s official title and summary of the initiative is as follows:  MARIJUANA LEGALIZATION. INITIATIVE STATUTE. Legalizes marijuana and hemp under state law. Designates state agencies to license and regulate marijuana industry. Imposes state excise tax on retail sales of marijuana equal to 15% of sales price, and state cultivation taxes on marijuana of $9.25

“The Attorney General’s official title and summary of the initiative is as follows:

MARIJUANA LEGALIZATION. INITIATIVE STATUTE. Legalizes marijuana and hemp under state law. Designates state agencies to license and regulate marijuana industry. Imposes state excise tax on retail sales of marijuana equal to 15% of sales price, and state cultivation taxes on marijuana of $9.25 per ounce of flowers and $2.75 per ounce of leaves. Exempts medical marijuana from some taxation. Establishes packaging, labeling, advertising, and marketing standards and restrictions for marijuana products. Allows local regulation and taxation of marijuana. Prohibits marketing and advertising marijuana to minors. Authorizes re-sentencing and destruction of records for prior marijuana convictions. Summary of estimate by Legislative Analyst and Director of Finance of fiscal impact on state and local government: Net reduced costs ranging from tens of millions of dollars to potentially exceeding $100 million annually to state and local governments related to enforcing certain marijuana-related offenses, handling the related criminal cases in the court system, and incarcerating and supervising certain marijuana offenders. Net additional state and local tax revenues potentially ranging from the high hundreds of millions of dollars to over $1 billion annually related to the production and sale of marijuana. Most of these funds would be required to be spent for specific purposes such as substance use disorder education, prevention, and treatment. (15-0103.)

The proponents of this initiative are Donald Lyman* and Michael Sutton. The proponents can be reached c/o Lance H. Olson at (916) 442-2952.” [Red and underline – Ed]

First, the Marijuana Legalization Initiative Statute, first called 15-0103 was drafted by lobbyists, not Reps like MMRSA, with no input from veterans, medical marijuana patients, poor, or disabled groups, and sold as making pot legal for recreational use while maintaining the mindset of pot being more dangerous than a gun or a bottle of Jack, Jim, or Capt. Morgan. The lawyers who drafted this state-sponsored initiative, a more complex Prop 19, are concerned with one thing – money from the masses for crony capitalism. The most current name is the Control, Regulate and Tax Adult Use of Marijuana Act.

Let’s look at that opening paragraph and examine the words in red from the text according to pp 178-210 from the Voter’s Guide that was mailed out to households.

Line 1 – legalizes marijuana but does not reschedule under the state code making this a shell legality. Hemp law under the state doesn’t exist yet, but there is a blank Ag Section [11018.5] waiting to be filled in after the election with whatever the state lawyers want to write in. This is a blank check written on the people of California, sick, well, adult, child, or pet [dog, cat, horse, etc.]. This will be cashed in after the election for George Soros’ GMO hemp. His placement in the cash food chain of Prop 64 is shown below.

Line 2 – Designates state agencies to license and regulate marijuana industry. This heading is cram packed with deception. First, this state sponsored Prop 64 seeks to re-brand all cannabis and cannabis products as marijuana. Marijuana as a plant or drug name doesn’t exist because the word itself is slang.

Industry refers to the meetings that take place like yesterday’s two-day State of Marijuana Conference that happened aboard the Queen Mary. As illustrated above, the lawyers instructed to write Prop 64 or AUMA did not write this legislation for the people of California. All these bills are written to cut small citizens out of the business picture in favor of the national chains. The time table is set at five years for this takeover, or in the middle of the second term in office for the projected Newsom, giving him political clout. Prop 64 language is written so the unions can control all distribution and movement for a price to pay and play. This was discussed at the SOMJ last year in the meeting I attended. That’s me up in the front row in the green straw hat.

Designates means all the people who have used pot medically without a rec or recreationally  for years, as I once did before Occupy LA, are rolled into the category of ‘deplorables’, ‘black market’, and demonized so the world at large will want the State to make us safe from them by our betters. Those are the people who removed prayer from schools and the Ten Commandments from the Law.

State Agencies is another misdirection and a carrot. First, the proponents say they want to regulate pot like alcohol but they mean to do this by more and new State agencies, staffs, and vehicles which must be added because everyone knows how over-worked state workers are, what with all that automation getting in the way. State agencies are also the gateway to other states as commerce goes. Just ask Nestle how that’s working out, still.

License and regulate goes to the heart of the matter concerning cannabis, now re-branded as marijuana. The herb which should be treated as such, has to be licensed and then regulated, not by people why know the plant, not like any other herb or plant, by only by those who see the plant as a private cash cow, as various California cities, ie. Temecula, Hemet, Menifee, etc., ask their citizens to fork over more in taxes to support government services.

The regulation has already begun with the hiring of a new police force just to regulate the ‘marijuana industry’ starting with a new pot czar and her second in command. Though Prop 64 has yet to hit the polls for a vote, the state either arrogantly or knowledgeably acts as if the measure has passed in much the same way as Hillary Clinton acts about her presidency. That’s because this Plan 9 from Inner Space comes to us from her pal [Soros], the Establishment, and Hillary’s party [Democrats]. 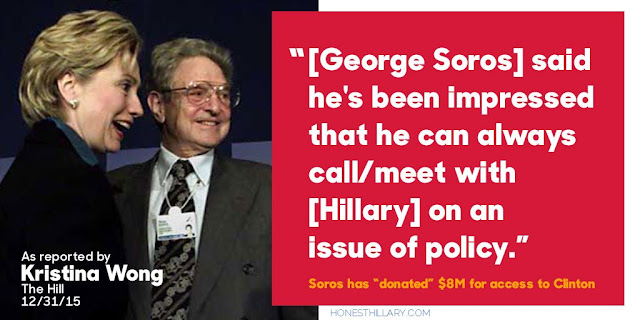 Imposes actually 19 new fees when you break it all down starting with the fees on seeds to the grower to any manufacturer of the State’s branding of marijuana, and beyond since Prop 64 makes seed sharing illegal along with donations of clones to friends, family, or other patients. Nothing moves unless the state government gets paid first. Each new fee has a new dept to monitor the use of the new money coming in.

Line 4 – Exempts medical marijuana from some taxes except when it doesn’t. Sec.3 (k) removes Prop 215 in lieu of Brown’s unconstitutional MMRSA. This is the section that cements the removal of Prop 215 and can be overturned by the courts as the earlier attempts by the state a few years ago were also overturned.

Sec 4.1 section 11018 of the Health and Safety Code amends the plant name of cannabis to Marijuana because you can own a made up name. With this one change, all these patents on a worthless drug will suddenly make their owners billions overnight.

Sec 4.1 section 11018 also allows everything 420 to be made illegal for ANY and EVERYONE 18-21 to feed the criminal justice system, the prison system, the NGO treatment counselors, all at the public/private citizen’s expense. Already the bail bonds people are advertising on high school fences with the biggest signs, because “Even good people get in trouble.”

This everything 420 includes just that: all products, merchandise, equipment, and accessories. The government can’t really control alcohol because each brand is privately owned. They can only tax, regulate, and charge a penalty when its use is abused. It is the same way with guns and ammo. With this ‘voter approval’ the state, through Prop 64 and by proxy Big Biz, can own any nutraceutical in an unprecedented way starting with this plant from Nature. This will set the scene for future name-change acquisitions of herbs.

Also like Monsanto buying the world’s biggest bee research company before de-fanging it, marijuana [now all hemp and cannabis] can be made GMO [DARK Act] and manufactured like in Soylent Green. Already the DEA has a sub for cannabis that could help all people hooked on opiates, but they want to make this plant the new Schedule 1. How much longer will we allow to Evil to govern over us before The Lord sends a David to Kill Goliath?

Sec 4.4 section 11362.1 is added to tighten criminalization over all people who use cannabis, now re-branded marijuana.

Sec 5, section 11362 removes all present doctors, present system in place to reinvent the wheel from the ground up by requiring all patients in 2018 be approved by State approved and licensed doctors, no doubt charging a special fee for that state certification for no educational or experienced background.

Show Me The Money 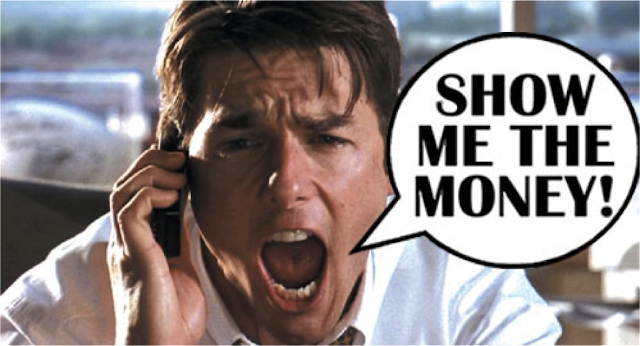 Net reduced costs ranging from tens of millions of dollars to potentially exceeding $100 million annually to state and local governments related to enforcing certain marijuana-related offenses, handling the related criminal cases in the court system, and incarcerating and supervising certain marijuana offenders. Net additional state and local tax revenues potentially ranging from the high hundreds of millions of dollars to over $1 billion annually related to the production and sale of marijuana. Most of these funds would be required to be spent for specific purposes such as substance use disorder education, prevention, and treatment. (15-0103.)

Extra Credit: Under President Obama, Eric Holder issued his own executive order removing the Second Amendment Right from all medical marijuana patients. The NRA, like Black Lives Matter, didn’t care a wit about this infringement upon the weakest segment of the population, even after contacted in Orange County, a NRA stronghold, outside of their own constituency. They were warned this non-involvement would come back to haunt them. Care to bet that testing positive won’t grant the state’s new Regulators a visit to see if you own a gun? Especially after Hillary gets in by hook and crook. 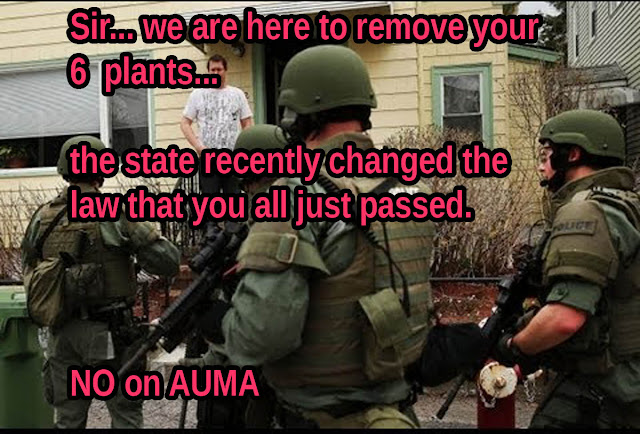 The city of Temecula was born through the California system called Direct Democracy. This system allows for the people to have a direct avenue around the government interests in setting the rules that govern them. Quietly, like with MMRSA, the state government wrote a law around our Direct Democracy [an arbitration buyout with you as the outsider] and used this untested new law to settle a case with a group’s written initiative. The State smooth-talked this particular group with a compromise but the next group might not be as easy and take their case to court. Passage of Prop 64 seals Sacramento’s attempt to muzzle the people’s voice and will to be free. This point was researched by Martin Victor and Laurel Rosenhall (Press-Enterprise).

Extra, extra credit: For #NoTPP fans in California. Stopping Prop 64 #NoOn64 will mean when the TransPacific Partnership is hatched by Obama, his baby will be still-born. California is the key. Cannabis is the key. We are the Key.

Your email address will not be published. Required fields are marked with *